What’s Wrong with this Picture? 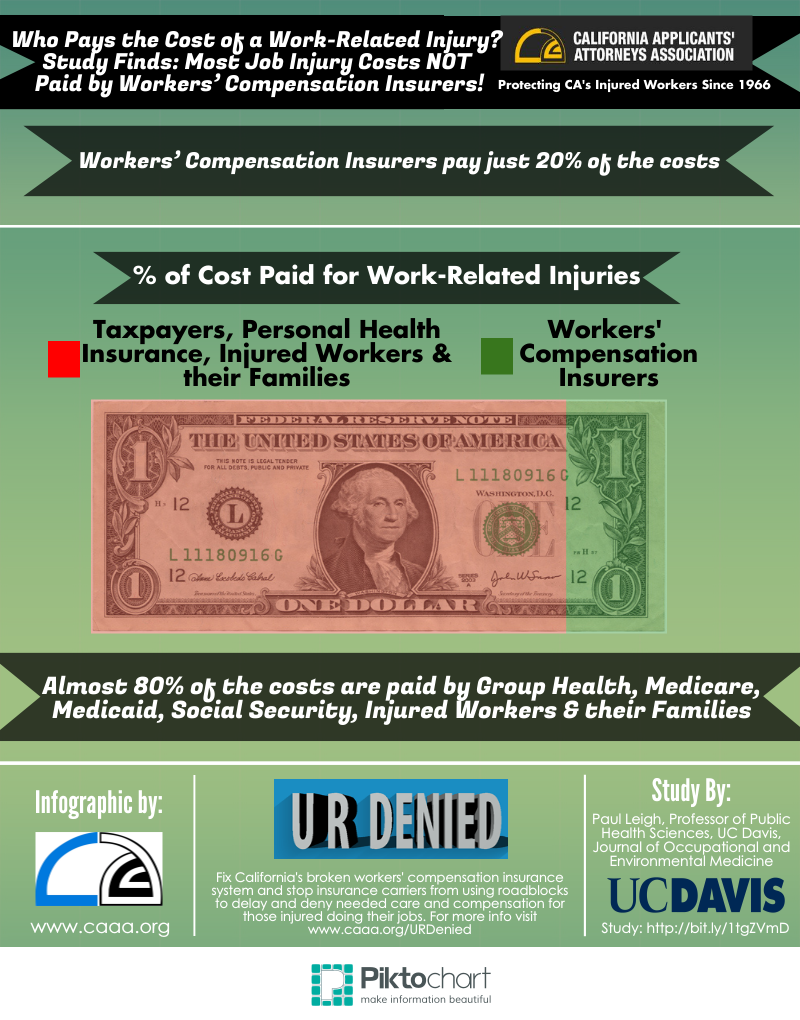 Sacramento, CA - The California Applicants’ Attorneys Association (CAAA), whose members represent Californians injured on the job, today continued its “What’s Wrong with this Picture?” series with an Infographic showing that workers’ compensation insurance companies pay just twenty percent of the costs of on-the-job injury claims, shifting eighty percent to taxpayer-funded public health programs like Medicare, Medicaid and Social Security, and other disability funds, private group health insurance and injured employees and their families. The infographic is based on a national study by University of California, Davis, Professor Paul Leigh that was published in the Journal of Occupational and Environmental Medicine. Professor Leigh said in releasing the study’s findings, “Cost shifting affects everyone, because we’re all paying higher Medicare and income taxes to help cover that 79 percent.”

“Why should taxpayers, private health insurers and injured employees pay eighty percent of the costs that insurance companies are paid by employers to cover?” asked CAAA President Bernardo de la Torre. “Insurance carriers are spending hundreds of millions of dollars delaying and denying their own doctors’ recommended medical treatment. When insurance carriers delay and deny medical care and disability compensation for work-related injuries, they shift those costs onto others. There are no meaningful penalties in workers’ compensation insurance, so insurers are free to deny legitimate treatment without consequence. This cost-shifting harms not only injured workers, and their employers, who lose wage earnings and productivity, but the rest of us as well.”

UR has almost quadrupled since 2005, and is one of the fastest-growing costs in California workers’ compensation insurance, costing several hundred million dollars per year. CAAA is urging a thorough overhaul of the UR process. The Infographics are posted here: https://www.caaa.org/InfoGraphix.