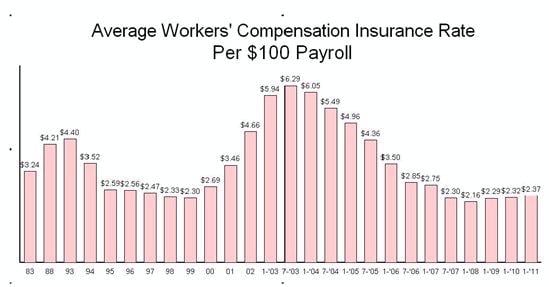 As the 2012 Legislative session opens there is widespread agreement by California's workers' compensation system stakeholders that permanent disability benefits should be increased. New data from the California Commission on Health and Safety and Workers' Compensation confirms that the adoption of the 2005 rating schedule reduced the average rating by 31.5%, and in any case the statutorily required amendment of the Permanent Disability Rating Schedule is now two years overdue.
Because California's economy is still recovering from the recent recession, Governor Brown has signaled that any increase in permanent disability benefits should be balanced by changes that create savings. The purpose of this report is to review the state of California's workers' compensation system in order to identify areas where potential savings can be found. Highlights of the report include:

The following pages present these findings in more detail. These findings make evident that the usual solutions to achieving savings in workers' compensation costs - slashing indemnity benefits and/or reducing medical treatment fee schedules - are not the answer in 2012. Indemnity benefits need to be increased, not cut further, and there is no evidence that medical payments to providers are a problem.

Instead, efforts to find savings need to focus on the rapid growth in medical cost containment expenses like utilization review, on the sharp increase in average medical-legal costs, and on the doubling of claim adjustment costs. Given that medical cost containment expenses now total more than $1.8 billion, while claim adjustment expenses exceed $2.9 billion, it should be possible to achieve sufficient savings in these areas to balance the cost of amending the Permanent Disability Rating Schedule.
Click on the image above or here to see the full report.
Posted 03-29-2012 3:49 PM by caaaAdmin